Setting Weekly Milestones: How to get through multiples drafts of a book

Today in my newsletter, I shared about a new adventure that began this week: I started to read The Lord of the Rings again — the fourth time now for me. Returning to my Tolkien roots seems good timing for me now as I allow Blood Dawn to “grow in the telling”, to borrow one of my favorite phrases of Tolkien’s (in the forward).

Here is a diagram to show the path ahead, by my talented graphical artist, Ave: 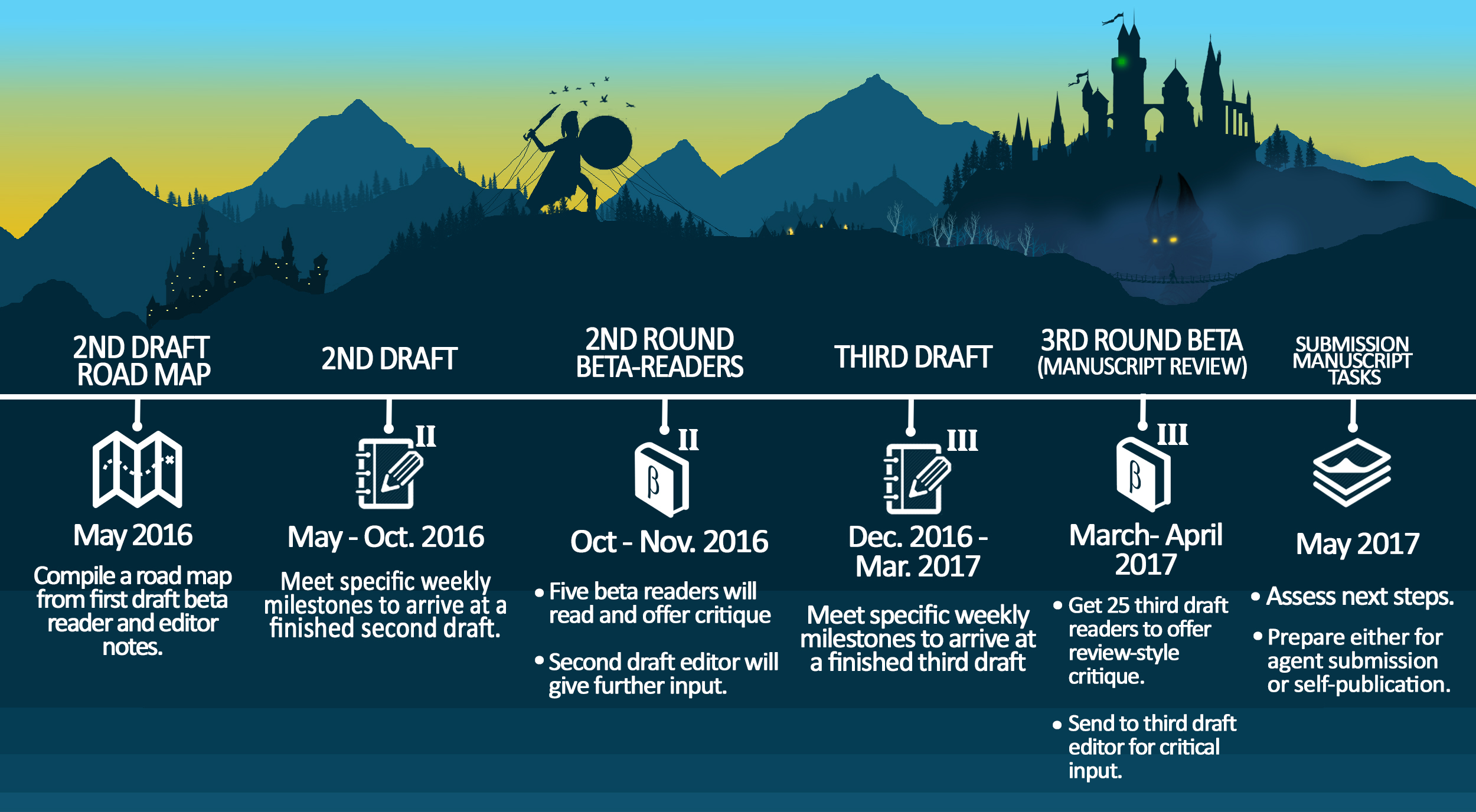 Today I want to focus on the weekly milestones I’ve set and how they can be broken down, in a way that any other writer can apply as well.

The first thing I did after finishing the draft of Blood Dawn was turn it over to three beta readers and an editor. I don’t recommend this for every writer who finishes their first draft, however in my case I used weekly editorial coaching on Blood Dawn’s first draft, which meant the first draft held together quite well.

I finished in December, then waited until February to hear from everyone. During this time, I did not obsess over Blood Dawn. I moved on and thought about the sequel, but most importantly, I took a break. Any work I did on writing during that time was for fun, with no time-sensitive goals attached.

It’s important to separate yourself from your work after you have written the first draft. For me, I found I was quite immersed in this book, having spent 15 months every weekend writing 3,000-8,000 words. There was even one weekend I wrote the whole climax sequence in one sitting (if you want to see that, at the risk of spoilers, you can view it in a time-elapsed 15 minute video, to the Lord of the Rings soundtrack, here).

Writing is exhausting work! The worst part of this though is you are often attached to what you’ve written if you go back to it not long afterward. Some authors recommend you write another book before diving into revisions, but if you can’t do that (or, like me, don’t have any desire to write anything else), then using this time while waiting for beta readers and an editor to get back to you is very helpful to achieve the same distancing.

I mentioned the importance of a road map in my post on the difference between a draft and a revision (read it here). I will be writing about the process of creating that road map in the next two weeks here, since I think it’s so important to help with the completion of a successful new draft of a book. Suffice it to say, making a road map takes time, and this is a good thing, since it adds to the time spent away from actual writing process that ended with the first draft.

I’ve been working on my road map since March, and I’m nearly done. Making a road map allows you to collect all the beta reader and any editor feedback you’ve received on your first draft and refine it into a scene-by-scene guide of what needs to be done. This means when it’s time to do your second draft, you have but to apply the given touches to the chapters and can proceed mostly in a linear fashion.

It’s easy to fall into the trap of just going over the first draft and revising it. This is not the goal of writing a second draft. Though I won’t be rewriting every word of Blood Dawn from scratch, I will be making some pretty big changes. I’ll even be writing new chapters and possibly getting rid of / combining others.

Each weekend when I do my writing, I have set specific goals to tackle chunks of Blood Dawn. I will not be going over these chapters and “fixing” them, but rather will be rendering the instructions from the road map in. Each instruction is going to be like solving a problem: some will be just a matter of rewriting parts of a scene, while others might have echoes that will tie together across several scenes in the whole book.

However, to keep me on track, I will be working linearly, in order of the manuscript. For example, the first task for me as soon as I have the road map complete, is to write the prologue to Blood Dawn my first draft editor recommended.

I have set specific goals for each week, and aimed to avoid ambition in setting them. The reason for this is twofold: I don’t want to fall behind, and I also would rather have too little to do on a given weekend, so that with the time remaining I can perhaps go even deeper than the road map, making great parts even greater.

I already have 5 beta readers rounded together to give feedback on the second draft. I will also be hiring another editor to do an assessment, much like I did with the first draft.

Just like the waiting that happens after the first draft, this time, which I anticipate will be 1-2 months, is a great opportunity to rest and reflect on the book. Because the sequel to Blood Dawn is coming together in the form of scenes I’m jotting down on pieces of paper, I will likely spend some time working on this while I’m waiting.

I like to think of my third draft as the time when all the polish will be coming out. The second draft is an opportunity to address some critical flaws and the period that goes into writing it should be the most intensive.

As with the second draft, I will be creating a road map to help with the third. I anticipate that it will take a shorter time to put this together since, ideally, I will have addressed most of the difficult feedback in the second draft, however this isn’t guaranteed.

To calculate the time, as shown above, I assumed the worst and gave myself one week for each part of the novel where I will be implementing the instructions from the road map.

Third, polished draft is great, but I still think it should be put to the test one last time before it goes on to production. What I’ve decided to do is publish (but not distribute) a special limited print of the third draft and give it to a select 25 readers to review as though it were published. Of course, they will all know this is just the third draft, but the purpose of this step for me is to test, simply, “If this book were distributed to a pool of people, what feedback would I receive now?” Many authors put their book to print without consulting their readers first and find several reviews they wish they could have known about beforehand. For this reason, I will be introducing this step before I move Blood Dawn to production.

(Plus, to those 25 readers, those books might be collectors items some day!)

At the same time, I’ll be sending the third draft out to another editor, one who works in New York and has New York publishing experience. I figure at this point I want the strongest final feedback I can get.

With the edits and the 25 reviews in, I will then assess next steps. Most likely I’ll make another road map from everything and apply one last revision before I decide what those next steps are.

But at this point Blood Dawn will be ready to move to its next form, and ultimately, whatever the path that lies ahead, there is no doubt to me that this tale will grow in the telling, and as it grows, the desire that began with discovering Middle-Earth will evolve into the book you will soon get to hold in your hands with your morning cup of coffee, which you will be able to open and read, and enter at last.

If you want to watch a video of me talking about how I use Asana to set all the weekly milestones and help plan out the time frame for when I’ll be finishing Blood Dawn, sign up to my newsletter where you can view a link to it in last week’s post, as well as viewing exclusive videos I only share with newsletter subscribers. Sign up for it here: http://www.epicfantasywriter.com/johns-newsletter

2 Responses to Setting Weekly Milestones: How to get through multiples drafts of a book