Posted on December 14, 2016 by johnrobinrt@gmail.com

Today we have historical fiction author Michael Bolan here to blog about the 10 rues for writing historical fiction — and there are some great tidbits in here for epic fantasy writers, too! Be sure to check out Michael’s latest release, The Stone Bridge: Book III of the Devil’s Bible Series.

Some years ago, my brother brought his family to Prague for a visit. Obviously I was thrilled to see everyone, but the question of what to do with a couple of teenage boys loomed large. After all, the things I wanted to do as a teenager were not things I wanted to do with my uncle. Thankfully, inspiration struck and one evening we found ourselves in a medieval restaurant, complete with swordfights, buxom wenches, fire-breathing and bagpipes. And that’s where my career as a historical fiction author was born.

When my nephews, wild-eyed and giddy from their first taste of beer, asked me why the restaurant was called “The King of Brabant”, I scrambled to tell a believable tale, cobbling together what I knew of the history with elements of other stories. I spun this tale out for three sightseeing days, punctuated every so often with a landmark or building whose history would back up the (often dubious) accuracy of my story. It proved to be enough to convince them, and they went back home believing me to be a stout historian and storyteller. But it wasn’t until I started to put pen to paper that I realised my nephews were an easy audience, and that readers are a lot less forgiving.

Writing the Sons of Brabant trilogy taught me a great deal about what it means to be a historical fiction author, charged with bringing history to life. So whether your inspiration starts within, or comes from another’s book, or from a tale woven of smoke and beer in a Bohemian tavern, there are a few things I’d share with you:

Decide what exactly your story is going to be. Is it an accurate retelling of the events of the time? Is it fictional adventure? A romantic tale or a story of war? Or all of the above?  What type of language will you use? Contemporary English or a more archaic version which reflects the period? For example, George R.R. Martin uses contemporary English, replete with swearing, but it doesn’t jar with the reader because the tone is consistent throughout. Where does the plot unfold: country, village or city?

Rule #2: Do your homework

Once you’ve chosen your setting, get your facts straight. Historical fiction readers hoard information like a dragon does baubles, and they’ll pounce like that dragon if you get something wrong. When researching your book, the internet is the obvious place to start. How far and fast can a horse run? How long would it take to travel by stagecoach from Paris to Vienna? Google Maps, Wikipedia, YouTube, etc. all help. But they are not without error. Make sure you double check all “facts” wherever possible. Create your own virtual and real libraries of information, using as many media as possible, books, articles, documentaries, expert opinions – the importance of factual accuracy cannot be overstated, so be prepared to dedicate a large part of your preparation to this.

Rule #3: Don’t do too much homework

At the same time, try not to fall down the rabbit hole of research to the detriment of writing your story. You can spend years trying to get every detail perfect only to find you still have a story to write. This is why deadlines are vital. If you find yourself spinning your own wool from sheep that you have reared to make cloth on a loom you have built, you’ve probably gone too far… Allow yourself a certain time for research, and accept that some details might not be perfect. That’s what editors are for!

It’s not enough to say that your hero walked down the street. The reader needs to walk beside him, smelling the dung in the gutter, feeling the drizzle slowly making his scratchy cloak heavier, slipping on the slick cobbles. Let them squint in the sputtering light of the oil lamps. Let them feel the sting as a leech latches onto their bare skin. Your job is to pique your readers’ imagination, so open the door for them, but let them walk through themselves.

In their enthusiasm to explain everything upfront/ introduce you to their world, many writers fall into the trap of boring readers with too much background information too soon. Let your story unfold dramatically and fill in the details as they are needed. Don’t show off your knowledge. You might well find that minutiae that are of interest to you are of no value to the story itself. The real trick is finding the balance between providing and retaining information – creating an entertaining story but leaving some intriguing suspense. Always focus on what will interest the reader – this is where your beta readers come in handy.

Rule # 6: If you love someone, set them free

Regardless of whether your characters are based on real people or are inventions, you will have to fill in lots of gaps in what records exist, especially when dealing with motivations, emotions and behaviours. Remember that your characters are in a sense, real. Set them free to do what’s right in the story, don’t force them to behave in a way they wouldn’t. Also, don’t judge them if they are chauvinistic, or keep slaves, or are racist – they may well have been obeying the accepted rules of the time. Of course you will naturally influence your readers’ opinions on certain characters, but your primary job is to describe accurately and meaningfully, and allow readers to draw their own conclusions.

Rule#7: It’s a marathon, not a sprint

Historical novels often take longer to write, because they require research at every turn. How were things done in your timeframe? A hundred-mile journey is easy in a car on a motorway, but on a heavily-laden mule, in the snow, through forest and scrubland with no bridges over the rivers and streams? That’s a different kettle of fish. Also, histfic tends to be longer than other genres. When I was starting out, publishers suggested 80K was a good length for a novel, but they would be willing to go to 120K for a historical saga. Which is why the Devil’s Bible Series is a trilogy – I wrote too much.

Rule#8: Write what you know, or get to know what you write

Most historical fiction writers start by writing on a topic they already know, or are passionate about, and rightly so. In any case, make sure you read as much as possible in your genre, both popular mainstream books, and less successful independent authors. Learn what makes a successful book. Digest readers’ reviews. Get to know the expectations and conventions the genre, from language and humour, to word count and cover design.

Writing about history doesn’t make you a historian. Their job is to research, hypothesise, argue and defend something that is as close to the “truth” as can be achieved. Yours isn’t. Your job is to tell a story, to make what happened real in the reader’s mind. So you don’t have to be balanced, you don’t have to remain neutral. You get to pick a side, so make sure you pick the right one.

Rule#10. Why let the truth get in the way of a good story?

If the facts get in the way of your storyline, change them. Some of them, anyway. Get something wrong and the reader will think you’re lazy or stupid, or both. But if you change something, you can often get away with it. Changing who won a battle can alienate readers unless the story is presented as an alternate history. But moving a battle by a few days? Not an issue.

I have yet to master all of these, but I couldn’t have written The Devil’s Bible Series on my own. I’ve had a lot of help, for which I am profoundly grateful, so now it’s my turn. If I can offer any advice, please get in touch. 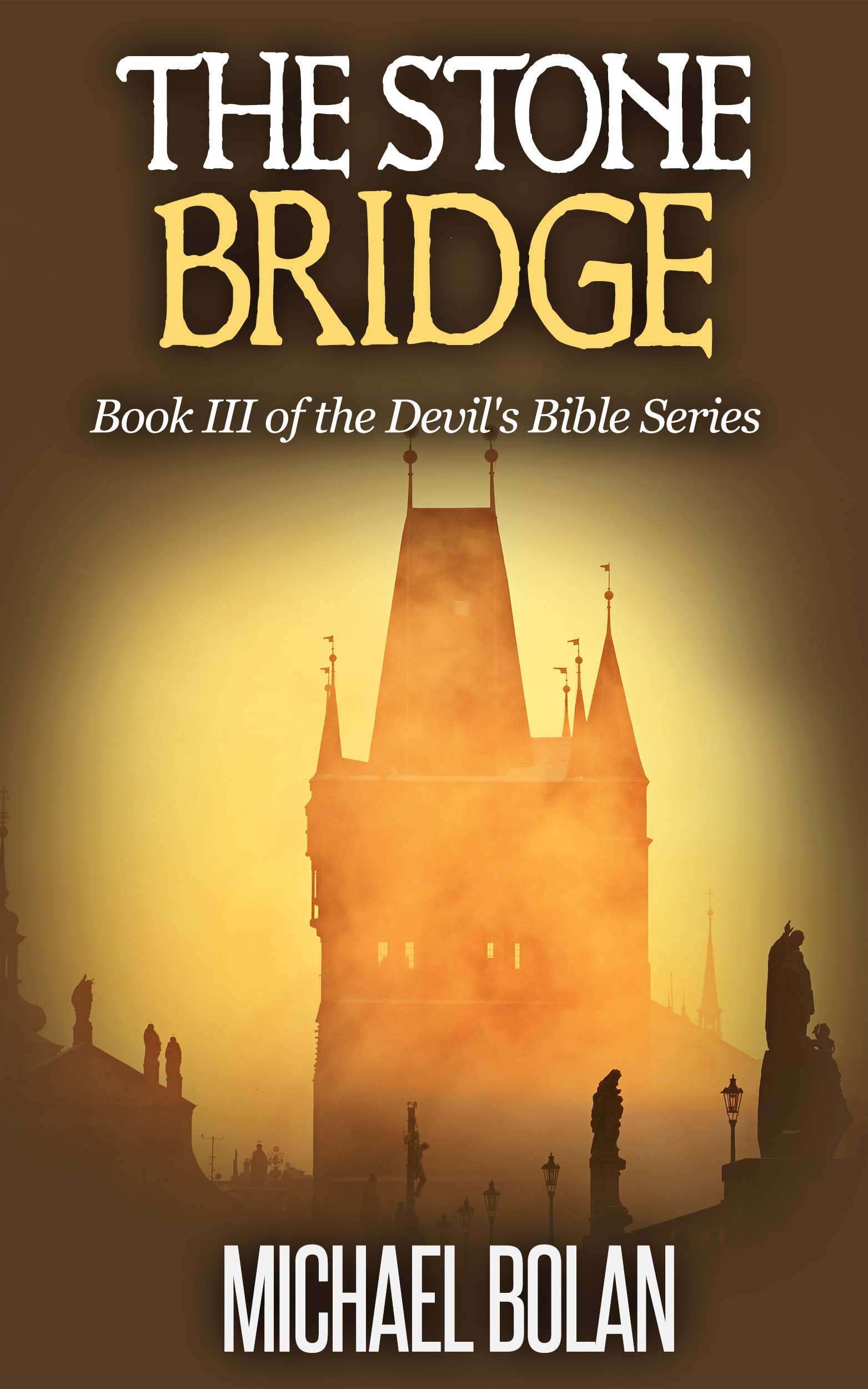 The Rapture continues to wreak havoc across Europe in its quest to acquire the elemental Seals, the only thing preventing the Devil’s Bible from purging the world in fire. Brought to Prague by the Fianna, the Seals’ only protection lies in the secrecy that shrouds them.

Reinald, leader of the Rapture, enlists the world’s greatest minds to free the Devil’s Bible from the depths of Prague Castle, where it has languished under lock and key for centuries. Meanwhile, the plans of the Four Horsemen unfold, wreaking havoc and misery across the entire continent.

Not content with forcing his siblings from their ancestral home, Reinald sends a vast army to harry and persecute them, forcing them to flee ever eastwards. Taking shelter with their friends, Willem, Leo and Isabella commit to one last act of bravery, making a final stand to defend the city of Prague.

As each nation commits its final resources into the conflict, all roads lead to the Stone Bridge that divides Prague, where the Sons of Brabant and their Fianna allies will face the ultimate test of their strength.

Purchase The Stone Bridge on Amazon.