Posted on November 9, 2015 by johnrobinrt@gmail.com

Today, my World Builders guest is Damien Boyes, author of Second Skyn, which is coming out soon. 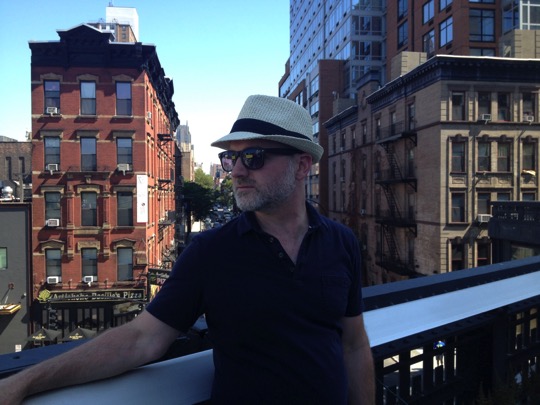 Damien grew up on Terminator and Raymond Chandler and Green Lantern. On Deus Ex and PWEI. Blade Runner is his chicken soup when he’s sick. He rereads Neuromancer every few years, and still loves the image of payphones ringing one by one as Case walks by, anachronistic or not.

He’s s UX designer by day, a dad and husband by night, and a writer in the moments in between. Lost Time, the book project he’s working on for the better part of a decade, is almost ready to see the light of day.

The first and second books of the five-part series are set to release to Amazon on Dec 5 and he’s currently looking for advance readers. If you’re interested in a fast-paced, sci-fi thriller, visit his website or shoot him an email at Damien “at” damienboyes “dot” com.

Describe your world building method. Do you have forms that you fill in? How do you organize your notes? Do you use a wiki or some other software?

I use many different things to keep my world straight, probably too many.

I keep everything in a wiki that I used to update regularly, but now that the world is fairly set I haven’t revisited in a while. It’s broken up into various categories (Culture, People, Economy, Politics & the Law, etc.). I write essays and advertisements and fake school curriculums and character monologues to explore various parts of my world.

I have an ongoing glossary I add invented terms to.

I use Google Keep to take notes and remember things to change or ideas to add.

I used a spreadsheet to create a full timeline of major events from today stretching out over the next forty-odd years.

I used another spreadsheet to track each scene, what happens in it and what world-building elements are introduced.

And to add to all that I have miscellaneous charts and slide-shows, mind maps, and digital maps of events and locations.

The good thing is, even thought most of it doesn’t end up in the novel, I plan on updating all this material and using it to populate my newsletter, my website and my Twitter. So hopefully it won’t be wasted.

How has your world building process evolved over time?

One of the hardest things I’ve had to learn is to let go of my desire to keep my near-future world and our world consistent. I try, but the world moves too fast.

In one of my earlier stories I had a particular building on the edge of an industrial area as one of the settings. Since I wrote it, that lonely building has become part of a brand-spanking new commercial development, which threw off my attempt to keep a linear progression between our world and the story’s. But there’s only so much you can do. Anachronisms show up all the time in sci-fi. It’s part of the deal.

Whatever rules you make up for your world, they need to be grounded and self-consistent and there needs to be limitations to how they work.

Too often I read stories that have world-building that shifts to fit the needs of the plot. The rules you create for your world should provide a structure for your characters to operate within. They should offer unique sources of conflict or drama you can’t get in the real world. That’s one of the great things about SF/F, planning to defend a town against a horde of undead dragons isn’t something you get to do in real life. It would have unique problems and situations that can be mined to create an amazingly compelling story.

One of my biggest pet peeves is when the author has a character refrain from using an introduced piece of technology or magic that would otherwise immediately solve the plot conflicts. Take Doctor Who’s sonic screwdriver. I watched too many episodes that had the Doctor miraculously save the day by doing something with his magical tech that, if he’d done it at the beginning of the show, would have solved the situation instantly. Or Hiro’s time travelling powers from Heroes. They were so powerful the writers had to come up with ludicrous reasons to keep him on the side lines, otherwise he could solve all the problems by stopping or travelling back in time.

Remember, when you’re creating magic or technology, there need to be limitations. It’s those limitations your characters will need to strain against in order to succeed.

What tips do you have for aspiring fantasy writers on how to create a solid, believable world?

For me, one of the most interesting parts about world-building isn’t creating the fancy new technologies or mind-bending magic systems, it’s exploring the second- and third-tier effects those inventions would have on the world. You can’t just dump FTL travel into a culture and expect it to stay the same for very long.

In my story’s world we’ve figured out how to scan the human brain and upload the consciousness to a computer, but the brain is destroyed in the process. It’s a one way trip. I spent a lot of time researching, trying to figure out how I could give this technology a sense of realism. I hand-waved some of the tricky bits but created an entire process around how the technology would work. Then I created a business process around it. Then I tried to figure out how our world would be affected by the introduction of this technology. What it would do to families and religions and career paths and politics and the economy. My world is near-future and I want to keep it as based in reality as possible, so I needed to plausibly extrapolate how the technology I’d introduced would likely affect our world today.

Then, by exploring these knock-on effects I was able to flesh out the world even more, and hopefully make it more believable.

Be sure to check out Damien’s novel, Second Skyn, coming out on December 5th:

If it weren’t for his Digital Life Assurance, Toronto Police Detective Finsbury Gage would be dead–smeared across the highway by a crazed man in a stolen urban assault vehicle. Finsbury hung together long enough for the recovery team to arrive. His wife wasn’t so lucky.

Now, six months later, his mind restored to a prosthetic brain, wrapped in a healthy new body, and technically immortal, Finsbury is back to a life that no longer exists.

He’s all alone, his home a shrine to everything he lost.

He’s been reassigned. Knocked from Homicide to busting bit-heads and chasing after lost minutes of the idle rich.

And his thoughts are coded into light.

The only thing keeping Finsbury from blowing his plastic brains out is the memory of his wife’s death. It’s 2.57 seconds long and plays on repeat, every time he closes his eyes. Inside the searing pain of loss he finds a reason to go on–the haunting glimpse of the wild-eyed man responsible for his wife’s death.

Finsbury’s gonna find this guy, no matter what he has to do.

But Finsbury isn’t the only one on the hunt–something is coming for him. Something like the world has never seen.

You can connect with Damien in the following ways: